Receding gums occur when then gum margin moves away from the white enamel crown of the tooth.

Receding gums occur when then gum margin moves away from the white enamel crown of the tooth thereby exposing the yellower root. The cause of receding gums is most often due to gum disease, but it can also be because of forceful toothbrushing on naturally thin healthy gums or because of orthodontic treatment. Gum recession can occur at one or several teeth in the mouth and this gives the appearance of “longer in the tooth” and “black triangles” appearing in between the teeth, which can look unsightly.

Gum recession is a relatively common condition and almost invariably occurs after effective and successful treatment of gum disease; the degree of recession usually mirrors the extent of the disease. Gum recession does not necessarily need to be treated and should not lead to tooth loss if the teeth are stable and the gums healthy. The altered appearance might not be visible if covered by the lips, but the exposed yellow roots might be sensitive; this can be managed with desensitising toothpaste. Effective tooth brushing at the gum/tooth junction and under the gums is encouraged as recurrence of gum disease will lead to further gum recession. Forceful brushing (especially with a hard brush on thin gums) on the outer aspect of the gums is to be avoided as this will contribute to gum recession.

If gum recession leads to a cosmetic problem, at Blackhills Clinic, we have several methods by which our Specialist Periodontist Marilou Ciantar can correct this and give a more cosmetically pleasing appearance. The method used depends on the cause and its extent, but the two main treatment techniques for addressing gum recession are either by gum veneers (removable plastic veneer which skirts around the crown margins Fig 1) or by gum graft surgery (along with some contouring of tooth edges Fig 2). 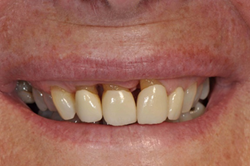 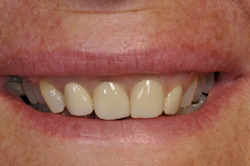 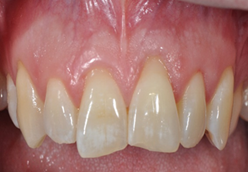 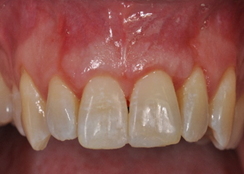